“Hope is a dangerous thing, my friend.”
– The Shawshank Redemption

I lost my candidate before the primaries were done, before I even got a chance to vote for him. I had picked him out with great care and felt deep certainty about my choice. By the time it was my turn to vote, Huckabee was nothing close to a realistic possibility. His candidacy was over almost before it started, and it made me sad.

I’m not unaccustomed to this. I reached voting age in 1984, and the same thing happened at my first presidential election; I chose a candidate I believed in, and he was history by the time the primaries hit Illinois. Back then, I still voted for my guy, just to make a statement. In the most recent primaries, I chose in my disillusionment to sit it out since I felt no passion for anyone else, and couldn’t justify declaring myself one party or the other when the choice of my choice had been taken from me.

In the years between, I’ve done a lot of passionless voting. I’ve chosen the least odious of the choices. I’ve voted for someone in an effort to actually vote against someone. I’ve felt sad, resigned, overwhelmed, and robbed of the power and majesty that is supposed to be these United States. I have voted for both democrats and republicans who have won, and who have left me feeling deceived and disillusioned in the long run. I have loved my country, but it’s been a very long time since I’ve felt really good about my country. My freedom to choose has been more an obligation and a responsibility. I got used to it being that way. 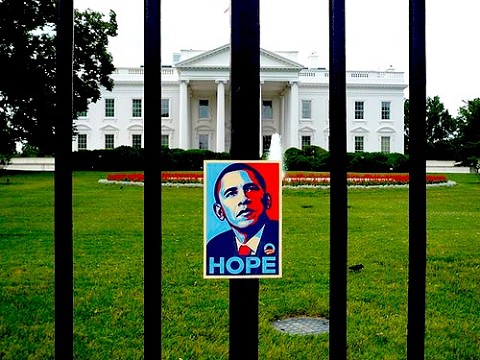 After the primaries were done, I sighed a deep sigh of relief about certain candidates who were left along the roadside. At least I wasn’t stuck with them. Still, there was very little joy. My parents raised me to be aware, active, and take part and my faith dictates that I not squander the good things I am given, including my freedoms. So I set about the work of figuring out who to vote for in November, assuming it would be another year of holding my nose while I punched the ticket.

Late one night somewhere along the journey, I was researching candidates when the strangest feeling came over me. A pulse of joy so strong it was a physical sensation in my chest. Possibility exploding within me as something old and nearly dead standing up again with a great roll of astonished laughter. It caught me off guard. My stomach flipped and I suddenly realized what it was: hope. It caught me off guard. I had given up any notion that hope and elections could be tied together. Politics had been the science of avoiding depravity so long to me that I scarcely could process hope when it happened.

Recognizing hope was disorienting to me in this arena. I found it in a candidate with whom I disagreed strongly on some very important issues. This was no starry-eyed hero worship. I proceeded with great care. After all, hope is indeed a dangerous thing, my friend. Many avoid it daily, unwilling to face the possibility of having those hopes dashed yet again. It took me time. It took me thought. It took me prayer. And it took me finding the courage to try hope, in an area about which I’ve rarely felt anything better than sad resignation, an area which all too often pulled me to frustration, despair, disgust, and a general desire to count myself out.

I hear the battle was ugly on television. Since I don’t do TV anymore, I was spared that much. I followed newspapers, the internet, and radio programs. Unlike so many who just wanted it to be over (a feeling I’ve known every election before this), I approached election day with joy, with my knees knocking yet trembling for joy at possibility unfolding. I watched others around me in the same journey: finding that hopelessness was not the final word.

Tuesday morning I was first in line at my polling place, with a smile. Tuesday night I sat up until midnight, watching history unfold.

I got a cell phone call from a friend on the front row at Grant Park, sobbing and screaming over the roar; Another sleeper awakened. I will remember that call as long as I live.

I felt the enormous relief and joy of my country taking a giant leap over hurdles of race, of scary middle names, of half-truths and outright lies planted along the way.

I watched as John McCain chose to be more American than defeated candidate, joining the call for us to stand up and bring truth to the part of our name that calls us “United.”

I watched as my next president, a man with whom I do not agree on some really important things, spoke humbly yet passionately, calling forth life to many things that have seemed dead for a long time now, the greatest of which is hope.

Hope is a dangerous thing. Barack Obama wields it well. For the sake of our country, and for the sake of many of us who have dared to give hope another try, may it continue to be so.