All of my life, I think I have been plagued by this visual picture of “Sinners in the hands of an angry God.” I think sometime, around 10th or 11th grade I was supposed to read that sermon by what’s-his-name. I think I read it, but I was never really all that good at reading comprehension. I’m much more of a visual person anyway, and I understand and think about things in pictures rather than words a lot of times. 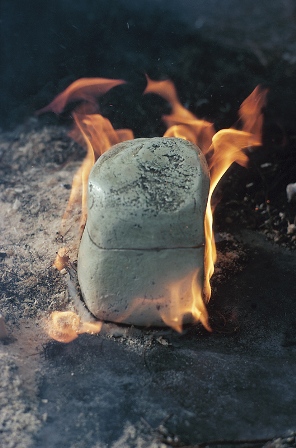 After reading it, I had no idea what was said in the sermon; all that I could think about was this picture, burned into my mind, of God holding dirty sinners over the flames of Hell. How scary that still feels, that God would be angry enough to thump us around like that.

It probably didn’t help the whole visualization thing that the textbook included a picture of God dangling this dude over a raging fire with other little stick figures being flung into eternal damnation.

I don’t really want to admit it, but deep down, in my heart, I think about it everyday. That sermon scarred me for life, and I never really even read it.

All it took was the title and I was hooked, fear was the bait. I’m afraid that I just can’t get enough of the stuff, even when I know that the result is that I’ll be wallowing in it, flopping around like a veritable fish out of water.

I’m not trying to knock a famous sermon, but just to bring to light the impression that the title of it had on me so many years ago.

One hundred percent of the time when I have the thought of God being angry, it is because of my performance. If we equate poor performance – aka “sin” – with anger, then we’re all up the creek without a paddle.

Something is seriously wrong here. I have thoughts about “angry God” all the time, but not once have I ever experienced Him that way. Graham Cooke says that we all need a revelation of an attribute of God’s character and that for him, it’s His kindness; I think for me, God has shown Himself to be incredibly cool.

I was never one of the cool kids in school, I was the outcast and reject much of the time, at least, that’s how it felt. I think most of the time, I’d reject myself if I could… and I think that just about everybody is really in the same boat, whether they admit it, or even know it, or not.

I don’t really believe that God is angry, but I sure do have those thoughts that are deeply engraved. I know it’s not the truth but I sure do act like it – on the inside.

What, then, do I really believe? I believe that even if He could leave me, He wouldn’t. He rather likes it when I’m around. In fact, He finds me irresistible and quite cute. I don’t really get it, but I’m getting better at receiving it.

I believe He would rather have me sitting on His lap on the throne than groveling at His feet. I believe that the way He feels about me doesn’t change, even when I screw up, and that He’ll gladly take the bad with the good.

If you liked this article, check out: Wrecked by the Ordinary: A struggle for self-worth

Shane is a budding life-coach specializing in helping Christians who are tired of religious calisthenics. You can check out his website here.