After much pressure, I finally saw the film Facing The Giants. If you haven’t seen or heard of this movie, Sherwood Baptist Church in Albany, GA created this thing in 2006, one of those “Christian movies” that actually made its way to theaters. Then it made its way to DVDs and youth groups, and it’s gotten praise and acclaim from NFL head coaches, leading Christian authors and the like.

Friends, family and parishioners have all recommended this movie to me. One especially forward person actually gave me a copy of it. And several months later – maybe it’s because football season is days away, who knows – I finally carved out two hours to sit down with this thing. 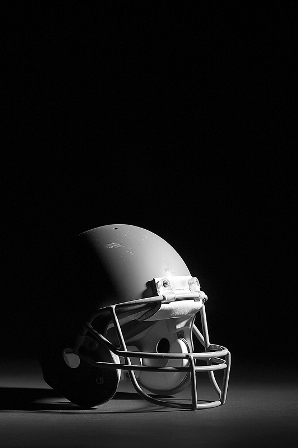 Now, I’ll say this. This movie is the most well-produced “Christian movie” I’ve ever seen – and this comes from a guy who saw Left Behind in theaters… on opening night. And the acting isnt so bad being that theyre all volunteers. And I know the pastors and people behind the film are delivering their interpretation of God as they see fit so I can respect the intent. But having said that, this film did give me cause for concern.

The movie paints the high school head coach and his wife in dire circumstances at the outset. Shiloh Christian Academy hasn’t had a winning season in forever, the best players keep transferring to other schools to have a better chance at success, and the coach’s job may be on the line. Within his own household, his home is in need of repair, his car barely works, and he and his wife have been trying for four years to have children with no success.

The coach and his wife are Christians coming into the story. They believe in God, they’ve accepted Christ, they appear to be fairly active in their faith – or at the very least, the coach turns to scripture and prayer when his life hits this low point. And so after an emotional exchange with his wife, the coach prays to God for clarity and vision, to know which doors are opening and closing and to walk through the right ones. And he asks his wife if she’ll still love God if they never have children.

And then things start happening.

The coach refocuses the team to focus on honoring God over winning football games. Maybe he personally rededicates his life to Christ, if you like that language and if that’s what they were trying to imply. Either way, there’s a change in him that he begins communicating to those around him, a sense that honoring God is a higher call for each of us.

Then suddenly, the team starts winning. Parents back off. Revival breaks out at the school spontaneously. One of the parents, fresh off reconciliation with his child, buys the coach a brand new truck. A few minutes later, he gets a raise. The team keeps winning, making it all the way into the playoffs. When they lose there, the opponents are caught for cheating by using two ineligible players, so Shiloh still advances. And when the team is on the verge of winning the state championship, the wife goes in for a pregnancy test and discovers she is in fact pregnant.

Its all heartwarming; I get it. The makers of this film are trying to portray an evangelical worldview and spread the message of God. But what “God” are they spreading? What’s the moral of this story? That when everything is going against you, if you dedicate your life to honoring God, then suddenly everything will start going right for you?

I’m not trying to hate on this movie at all, I’m simply asking the question. Really, isn’t that what this is about? Because it’s not minor things – all of a sudden, things go from completely terrible to completely perfect for this coach and his family. Trust Jesus, and you’ll get a new truck and a raise and your barren wife will conceive, and you’ll get it all?

This movie made ten million dollars before we even talk about DVD sales, licensing fees for churches or anything else. It’s wildly recommended among Christian/church circles. It’s immensely popular. Why? Because this is the God that we want.

Movies like this one and a significant majority of most Christian literature are based on varying degrees of this idea. The more extreme would call it the prosperity gospel or “name it and claim it”. But even to a lesser extent, when we equate our happiness with God’s plan, we’re worshiping at the wrong altar. We don’t need the God we want. We need God.

In reality, there are lots of faithful men and women who simply cannot have children, and they are asked to still love God. Because sometimes God doesn’t save us from our circumstances, he walks us through them. And if prayer gave us everything we wanted, Tennessee would never lose a football game.

The promise of God isn’t really anything more than his presence in our lives.

It’s something I’ve come to interpret this way: that the offer from God isn’t about any one particular piece of bread he can give you. It’s not about your promised wealth or your future happiness or your mansion or your anything. It’s not a new truck and the miracle you’re looking for. It’s not any one particular thing…it’s simply him. He is the bread. It’s just Jesus. The offer was and is and shall remain simply Jesus – a God who comes to a man in the desert and says “I am who I am”, and offers that same presence to us, just as he is.

Not as the God we want him to be. Not for any one thing he might be able to do for us or that we think we deserve. Simply as God. He is who he is.

And thankfully, our perceptions don’t change him.

If you liked this article, check out: When You Pass Through the Waters

Will is originally from Knoxville, TN and currently serves as pastor to a small community of churches in southwest Virginia. You can email him at [email protected]