I am assembling a TV cart with a pile of assorted pieces surrounding me.  My frown is deep as I study the instructions, but it’s coming along swimmingly, really.  “How are you so good at this?”  She picks her way through the pile of parts, glancing at me as she asks. 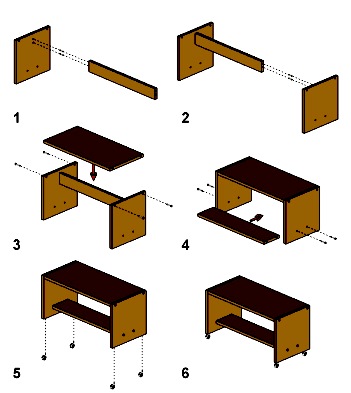 My gaze doesn’t waver from the instructions, but I change gears for a minute.  “Even when I was married, I had no one to help me with stuff like this.  It just made more sense to learn how to do it well.”

From the corner of my eye I see her shaking her head.  “How long were you married?”  Her tone completes her unspoken disdain.

“Oh, about fourteen years.”  I can never remember the exact number and I’m too busy to do the mental math.  I grunt, pushing two interlocking pieces together and trying not to smash my thumb again in the bargain.

“Why in the world did you stay so long?”

I pause, remembering instantly a multitude of good times, grateful that all the yuck in the decade between now and then has not destroyed every memory.  A massive tumble of questions of shared blame bounce at electron speed through my head, and I consider how different the world looks to me now than it did back then.  I filter the sharing level to fit the situation, and leave it at simply, “I have this thing about commitment.”

“Your religion.”  The words tie everything I’m about into a tiny package, and toss it into the garbage.  And then she moves on to her next task, the conversation apparently forgotten as quickly as it has begun.

My religion.  It’s funny, but my faith had very little to do with my actual life back in that horrific passage that was my divorce.  My staying had nothing to do with obedience to God and everything to do with keeping my promises and finishing what I started.  I wanted to prove those who had said it was a bad idea from the start were wrong.  I wanted to be a Good Person, strong and capable.  I wanted my kids raised in an intact home.  I wanted to save my husband from his own demons.

I certainly didn’t ask God whether I should stay or go.

After all, I had started the marriage in passive aggressive defiance toward God, trying to force His hand into blessing me because wedding vows had been said in His name.

After all, God and I both knew the multitude of ways my thought life and actions didn’t line up with His instructions.

After all, maybe if I asked Him, He’d say, “I’m not going to fix the relationship, and it’s never going to get better, and I want you to stay anyway.”

So I didn’t ask.  My staying wasn’t about my religion, any more than my leaving was.

We lived in a house without air conditioning, and in the heat of the summer on occasional desperate nights in the throes of the worst of it, I got in my car and drove to the country, finding a place where no one would hear me through the open windows.  Parking my car in the ditch along the gravel road, I turned it off and wailed, screaming at God and begging Him not to let this happen to me.

My religion lived mostly inside of Sunday mornings, other than those scenes in my car and the occasional guilt-laden prayer.  It didn’t fix anything.  And it left me grasping clumsily for words when in the midst of leaving, he asked me wasn’t I “one of those Christians” and shouldn’t I be forgiving him rather than backing away.

My religion was murdered during that passage of my life.  It was a long, slow, choking, ungraceful and unlovely death.  When it finally died, what remained was me, defenseless and desperate before the God with whom I’d played games.

At last, I was broken enough to know my need for more than Sunday school Jesus.  Separated from my strength and self-sufficiency, I finally began to really see Him, and really fall in love.

My religion.  How do I tell the story of who I was, and who I am, and how different the two really are?  How can I give her a glimpse of the One who gave everything for me?  How can I make her understand why I so gladly “waste my life” for Him?

I sigh as the pieces snap together, smashing my thumb one more time.