Written after watching the Invisible Children Rough Cut documentary for the first time:

One minute of watching, and my eyes are so accustomed to this sight that they don’t take long to adjust to the window on my screen. My eyes are sore from being apart from the reality of this for so long. They are just dirt roads. They really shouldn’t have this effect on me. But they do. They always have, and they always will. It doesn’t even take a minute, for me to realize that my heart is beating in sync with the music of this land. 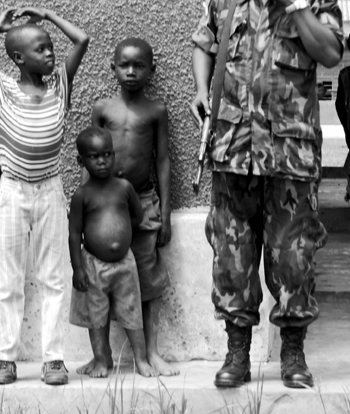 Their footsteps sound like drums, and their eyes look like fire. There is a steady togetherness about these ones. In their hands they mean to bring hope. Into their stories they have inscribed courage. Their bodies are not weighed down by the trauma their spirits have endured. Instead their souls are free and all about them is lightness of being. That is if you look away from their eyes.

With their dancing smiles, they will speak of what can never be taken from them. Really, their richness of spirit lays me to waste. They lay claim to things I would never dare to possess. But their hope is never in vain. Music will be the wave they ride upon — the crest that takes them to His love.

In my shallow life, my mind has no boundaries that will give me room to imagine what living with 60,000 other people around you is like. Looking at their faces, you would never know why they are there. Nothing in the air gives a scent of injustice. The buzz that exists stems not from excitement. Questions take the place of fear, and conversations are perpetually in motion. They dwell in chaos, yet their chaos is ordered. Even their chaos keeps itself to a rhythm.

The name is sewn into the fabric of their lives. They are out of place, and all the while the blood in their veins, is the same colour as mine. They too ache for a land called home, but they have arrived at this longing in a way I beg never to be attached to. Faces with skin that gives the appearance of perfection. Faces that look the same as mine does with tears over it. A little girl throws her soul into choking back the tears, as she speaks. It costs her far more to disburse the silence. My complacency is secure and my lips have never been barred from speech. Their shattered lives have hope locked inside. I see it written in the lines of their faces. They have been told they dwell in safety, in this make-shift world of things they were never meant to belong to. Yet they know that even shelter has become an illusion. Meal-times have become storms, where tears soak food like streams of salt. They pray prayers that cause Heaven to sway and move, embracing them in their broken places. For each night, the light is the same. The moon keeps watch over them, and reminds them of better days to come. They are a people who are moved, and who express the things that we tend to hide from. Captive in the palm of their own people, yet hope plays the stronger chord. While we shut our eyes to forget, they close their own to remember. Lives meant for amazing things, are instead sold out to violence of the worst kind. The voice of oppression rules in weakness, as they are forced to take even their own lives. Death, like an intimate enemy, forces it’s crooked way into their souls. Each fragile frame holds a beating heart, covered in scars. Each scar makes a mockery of their strength. Still no voice holds the power to diminish the relentless spirits that are their foundations in life. Somehow, though different in depth, their scars are a line in the sand, just like mine. Scars that mark the entry to life, and the crescendo of a battle that was not worth the fight.

These are they, who brim with unreasonable dreams. The dreams I dare to dream are laughable when I listen to each of them tell of their dreams. They are more alive than I have ever been. Beaten, but not destroyed. Struck by the hand of terror, yet not abandoned to corners of darkness. Sometimes I forget that the smallest ones of all, can be the greatest giants. The ones who will fight with love burning brighter than the evil, that has tried to terrorize them. They are an army, whose hands are no longer stained by the blood of innocents, but are drenched in the blood of One Innocent. The only One to have ever lived.

Gabi has lived for 25 years with a heart that beats for Africa, despite currently living in the South of England. Her life is not her own and she has recently returned from spending the summer in Uganda. She is heading back to Uganda in January. Until then she is mostly to be found dreaming impossible dreams whilst barefoot. She can be found here .