When you regularly plan activities for youth, it’s difficult to find variety, particularly when you’re almost 7 years into it. The requisite beach trips, laser-tag, putt-putt mini-golf, go-kart lock-ins, gym lock-ins, youth camps and ski trips are enough to make anyone die of monotony. 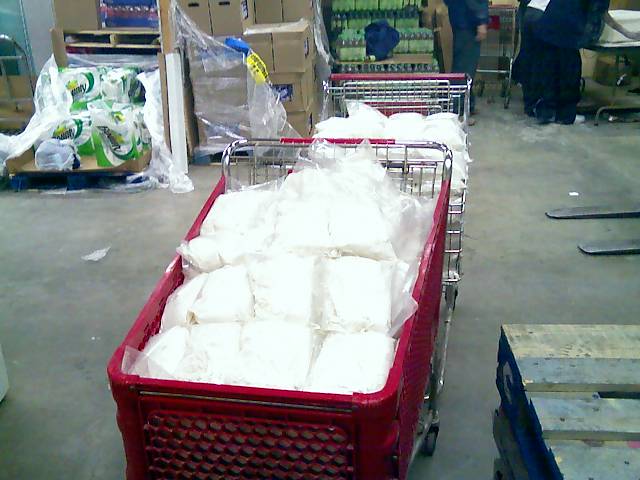 In the desperate search for something different I decided 2009 would be different. I had noticed at church that our folks seemed to genuinely enjoy being around one another (which is a good thing, as churches go).

More specifically, they have a blast–it doesn’t matter where, when or the conditions. It could be joking around while spreading mulch on a church workday or serving nachos to a kid in a Spider-Man outfit at the Halloween festival or serving dinner to the homeless at MUST Ministries –these people have fun together.

With teenagers this happens almost immediately. Whether it’s the guys racing to see who can pack food boxes the fastest, or a middle-schooler priding herself on her re-organization of shelves, they always make the best of it.

I think it’s for all those reasons that I’ve decided that every youth activity we do this year will have some element of service attached to it. And this included our first event of 2009, the annual Youth Ski trip over New Years.

Through the wonder of Google, I was able to make contact in September with Jimm Norman, the director of Tender Mercies Ministries in Princeton, WV, where we temporarily took up residence in the Hampton Inn. By the time the Ski Trip actually rolled around, my head was spinning. I awoke the morning of Ski trip at 5 AM and suddenly realized I had signed us up for this.

All the thoughts you might think ran through my head. It was too late, I hadn’t put this in the itinerary, I hadn’t told the kids and parents, they would be ticked because we were cutting into time on the slopes which they had paid for with their “all-day” pass. I figured we wouldn’t do it–that if Jimm called I’d just tell him we weren’t going to be able to do it and we’d try to catch him next year. I felt more than a little guilty about that, but I figured I’d be over it when we were into our tenth Rook game in the Ski Lodge, or about to stab each other over a game of “Spoons”.

Then the phone rang. It was Jimm and he wanted to make sure we were coming. I couldn’t get past the guilt. I looked into he rear-view mirror and saw a van full of teenagers that think they can do anything. They’d get tired of skiing soon enough–we could even let the hardcore ones night-ski if they wanted to. I couldn’t tell him we weren’t coming. “Yeah man, we’ll see you about 8 in the morning!”

We got lost at least twice trying to find it, but by the time we made it down the gravel road we saw a small steel building with a sign on it. Nobody seemed to be home, until a man walked around from the back and called us over.

Jimm’s in his thirties, a former youth minister and someone who feels passionately that taking care of people’s most basic need–food–is something Jesus would want us to do. He was humble and gracious. He beamed with pride when he talked about the new insulation they’d been able to install over the “waiting area”. The chaperons and I looked at each other in disbelief when he said they served 640 families out of this little steel building. He showed us the boxes vegetable pasta he found for $4 per 30 lb. box, adding that it was vegetable pasta, so it provided some much need nutrition to residents of West Virginia. He showed us the unopened 25-pound bags of biscuit mix.

We packed and stuffed, each bag carefully scooped and weighed into 2 lb. portions before one of the college kids heat sealed them. (And everyone tried to refrain from pointing out the obvious resemblance between the bags of biscuit dough and blocks of cocaine.) Meanwhile, the rest of the group managed to re-organize two entire pantries of canned and dry goods. I had the broom in my hands and was sweeping up at 11 AM, thinking we had worked way ahead of schedule and done everything we could to help. I asked the question I knew I shouldn’t have–“Anything else we can do?”

The answer was not what I expected. What we hadn’t seen on the tour were 20 boxes of diced apples sitting in the walk-in freezer. They needed to be broken up and repackaged just like the biscuit dough and the pasta. The natives were getting a little restless by this point, but I knew it needed to be done, so I got another youth to start unloading the apples.

One hour later it was done. 800 pounds of apples, 400 pounds of biscuit mix and 800 pounds of pasta. Almost one ton of food, packed by 11 teenagers and three adults in 3.5 hours. There was a genuine sense of accomplishment when we knew that we had finished, but we didn’t really understand it until I asked Jimm to say a few words before we left.

Jimm went on to say that the apples has been in the freezer for three months. He has about 40 volunteers, but they are sporadic, normally coming in groups of four or five and working 1-4 hour shifts. The pasta was ordered in September, the flour in October. In one morning, 14 people from Georgia did three months of work. They were caught up, and ready to face all those who would come through their door in 2009.

We did a lot of other things on Ski Trip. The youth had a blast, whether on the slopes or across the card table. Those memories will hang around for a while, but they’ll disappear eventually. The food will disappear too, into the stomachs of people across lower West Virginia who we’ll never meet or know. They’ll be hungry again and Tender Mercies will still be there to help meet those needs.

The reality is my first thought when I remembered scheduling our visit to Tender Mercies was that we should just stick with the vacation. Let the kids have fun, don’t bring the realities of poverty and hunger into a “fun” trip. But that wasn’t the plan, and it never should have been.

Last year when Jen and I were on a cruise we started trying to figure out how to be faithful on vacation. We tried to be kind to our taxi drivers, tour guides, host and hostesses. We tried to over-tip everywhere and not come off as stereotypically self-involved Americans. We had a blast and I’m sure we failed at points, but I realized that I can’t out-run the gospel.

It follows you wherever you go.

It has a nasty habit of asking “What’s that person’s story? Is this how they feed their family?”

When we left the Ski Lodge the first night I looked at the piles of trash on the tables, the drinks knocked over and the gumdrops trod into the carpet. I wondered how the workers who had to clean it up that night felt about all these church youth groups (including ours) leaving this mess behind. What kind of Jesus could they make out from the aluminum foil, ketchup packets, foam trays and half-empty soft drinks?

More than anything our time at Tender Mercies reminded me (and I’d like to think the youth) that faith doesn’t take a vacation. We shouldn’t be able to hide our love for Jesus any more than we can hide our hair color or our freckles.

Don’t get me wrong; I’d like a vacation as much as the next guy. I’m just afraid that when I say “Lord, when did I see you hungry, or tired, or thirsty, or beat down, or oppressed and I didn’t stop and help?” he might have a whole staff of people to point to.

Trey is a minister/writer/techno-geek/observer/teacher/wanna-be social activist living in the suburbs of Atlanta, Georgia.