The first time I met Marco Antonio was when my ministry team was going to meet up with members of the Gods Child Project in Antigua, Guatemala. Marco was curled up with his back to a metal fence facing the street. Shawna stopped at his side and began to ask him a few questions. Chad motioned for me to go help her, and in my head I thought, “Oh man, not this guy. Lets just go.” But I went up and began talking with this young man, mostly just translating in Spanish for Shawna. Marco was completely high and could barely comprehend what was going on or why we were talking to him.

Marco is addicted to sniffing glue. He could barely take the bottle away from under his nose long enough for him to get a sentence out. Shawna and I went to go buy him some food, but told him that he would have to stop sniffing the glue as long as we were with him. He agreed because it meant easing the pain of the hunger he was accustomed to. He was very cordial for most of the time, but it was obvious that leaving behind his glue even for a few minutes was like ripping away his own child. It was not long before he just got rid of us, so that he could go back to the security of his glue bottle. 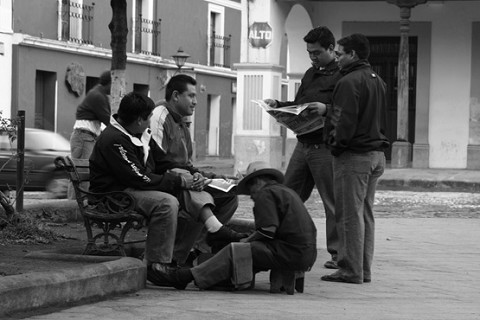 The next day, Shawna went back to visit him and bought him food again. She talked said to him what she could, but with limited Spanish, the words were few. Thursday, the following day, I was walking back from the Gods Child Project when I came across Marco once again. This time, he was awake and waved me over to him. I sat down next to him as he motioned and began to talk with him. He opened up to me about his past and why he was there.

Since he was six years old, his family abused him verbally and physically. He ran away from his home on the coast to find relief from his hateful family. But the streets met him with more pain. He had been completely alone since he was eleven and quickly became addicted to various substances, glue being his most recent addiction. He has been in the same drug rehab center twice, escaping both times because they also beat him physically.

They would try to beat the addiction out of him, but that only caused him to flee. I began to understand why he turned to drugs; his life has only been a series of rejections. Rejection from his family and rejection from society everyday, as people treat him as if he does not exist. I felt in my heart that the only thing I wanted to do was just to love him, to spend time with him, and to let him know that he was important.

I came back the next day with a few gifts for him. I bought him a blanket at the market and a hacky sack to play with. As I presented the gifts, a huge smile spread across his face. He repeated his thanks over and over again. I bought him lunch again, trying not to wince every time he asked for something else to eat. But I knew that I had never felt that kind of hunger that he had lived with all his life. So I bought everything with a smile, even as I counted the cost of everything he ate in my head. I took him back to our hostel and let him use our shower and had him cut his overgrown fingernails. He then showered me with thanks as we parted ways.

Earlier in the week, I actually shared the gospel with him. He even prayed with me for his salvation, but I believe that it was a decision based on his stomach and not his heart. Yet, I know that God will not forget those words he prayed even as he was high. As I left Marcos, I walked back to the hostel and asked God if what I did even helped. I felt so unsatisfied. I was leaving Antigua and would never know what happened to Marco. But God told me that I did all He wanted me to do. I showed him love, I became his friend, and he became mine. I fed him, and gave him warmth for the cold nights and a toy to play with. I plead with God that He will put someone in Marcos’ life that will continue the work that was begun.

We are called to love, even the ones who are rejected by the world. I have been reading the Ragamuffin Gospel, an incredible book about revealing that we are all ragamuffins, we are all tired and poor and have nothing to offer to God but ourselves. Marco Antonio is an incredible example of that. I go through life thinking I am on the right track, thinking God is happy with me because of all that I do for Him. Even that God needs me. But here Marco is, with nothing to offer, and I realize that I myself have nothing to offer.

Eric Hanson, a graduate of Northern Arizona University, is taking a year to backpack the globe. Eric is currently in Nicaragua. You can follow Eric’s journey here.