The way they grab for food with their grubby hands, dirt under their fingernails, it aggravates me.

I was squeezing a package of black refried beans into the pan –  kind of like how one rolls up the tube of toothpaste to ensure every ounce is used.

Pleased with my thorough squeezing technique, I tossed it toward the trashcan. Josue intercepted it. He motioned if he could have it. I shrugged. Really, could he get much more out of it? If he could just wait a little longer he was going to get a huge plate full.

Later that afternoon, I saw the black bean package again. It had been forgotten, thrown to the ground outside. This time it was ripped to a flat sheet of plastic –  no longer a bag – licked clean.

I confess, I get angry when these boys grab at food in the kitchen, when they demand more food or juice. After making the menu for the week and the grocery list and accounting for just the right number of bananas, bread slices, pasta and rice, etc – I’m a bit of a little general in the kitchen.

The grocery store is at least an hour away. But then I have to remind myself that these aren’t normal teenage boys. “Don’t they trust me that I’ll give them a plate of food in just a minute?” Trust. They don’t know what trust is.

They usually don’t get food unless they dig for it – in the trash. They don’t know their father. Their mom used to be a prostitute and now is in and out with a boyfriend that lives in the dump. Their home has three walls. If they were to say they were hungry, who would they tell? If their mom was around, she’d probably tell them to go dig.I’ve never hungered like they have. They don’t have a mom or dad who plan well-balanced meals, make sure they brush their teeth, take a bath and wash behind their ears. The only shower they get is when they visit us at the farm, which is a slow, cold trickle.God showed me this week myself in the boys. I do the same thing those boys do. Not trust. Stock up because I don’t know when I’ll get a “taste of America” again or a reminder of home. 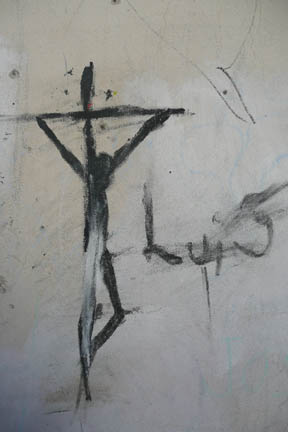 And beyond that… emotionally I do the same thing those boys do.  Their actions represent my jealousy. I envy a friend with a plan for his life or a friend who is getting married –  thinking that my God has forgotten me.

I’m jealous of a God-encounter that a teammate has or the way God speaks so clearly to someone, thinking that God is holding back on me. That He favors them more than me. I don’t trust that my God is good 100% of the time.

I worry about the future.

I’m acting like I don’t have a good Father who has a good plan for me, who loves me. I’m trying to write my own story, grab my own “food” –  often from the trash. He does know best. And He’s asking me, “don’t you trust me, I have something better for you. A big, well-balanced plate full.”The truth is God IS good 100% of the time. He hasn’t forgotten me. He isn’t out to rip me off. He has a plan for me. He isn’t ripping you off either, my friend. He has a good, good plan for you. Will we trust Him?Will we not hoard our food, our things for fear of what the future holds – or doesn’t hold? Will we not hoard happiness and good things to ourselves but instead trust that our God is a good, loving Father who gives good gifts at the perfect time?

He hasn’t forgotten us.

Ginger grew up on a ranch in South Florida, and you will rarely find her without a camera. This story is an excerpt from her travel blog.