If we were given a reason for why there is pain and suffering in our world, we would use those reasons as an excuse to not care for those who are suffering. Now, we’re left with the choice to care.

The other day, an email was waiting in my inbox. It was from a youth who is working through an age-old question of faith: Why does God allow suffering in our world? Her question wasn’t raised through class discussion, a youth group Bible study, or through a sermon she may have listened to. It was not philosophical in nature. It was not even blatantly theological.

In fact, that wasn’t really her question. Her questions were raised through her experiences in life: Why is a friend, who has been through so much crap and who doesn’t have a strong relationship with God suddenly being dealt another rotten situation? Why is my life so easy in comparison? And what do I do?

I could have responded with one of many Christian cliches about the effects of sin and the fall of man, but I think answers like that are designed to give us an excuse to carry on with our lives with our backs turned. Especially here, in North America. I know I’ve used them as an excuse, and I continue to do so. Besides, she’s probably heard all the cliches; after all, she did grow up in the Church.

What I’ve discovered in my few and brief experiences of talking to, listening to and being around those who suffer is that I become the better for it. But I don’t think that others are meant to suffer for my sake. For my growth. There’s a balance that needs to be found. Though, I’m not sure I’ve found it yet. I remember an episode that took place in Uganda last summer; it’s the story (and thoughts) of Xavier:

We were brought to one of five campuses of the Kampala Pentecostal Church. In some ways, it was like walking into any North American Protestant church. In others ways, it was a brand new experience. We sang the same worship songs, with the added bonus of a fifty-something voice choir and a 2,500 strong congregation. Following a message on loving our neighbours, we walked back out onto the streets of Kampala. Right past a man sitting on the corner of the parking lot, complete with his wheelchair, crutches, and a pan.

As usual, questions, concern, and a bit of frustration weighed down my thoughts all compounded by the fact that this man was sitting right outside a church where those walking past had just listened to a sermon on loving their neighbour. Looking back towards him, and then looking towards the team I could tell that Simon had possibly similar thoughts running through his head.

“Same thing as you,” he replied.

So, together, we walked over and sat with Xavier. Unfortunately, that was about the extent of our knowledge of Xavier, as he was rather hard to understand. After our brief and disjointed conversation, Simon left some money in the pan and we walked back to our waiting van.

Much of the past few days have been spent trying to understand the desire to care that I feel when I meet the David’s, the Justin’s, the Xavier’s. What is it about? There’s a tension that happens between whether it is about them or about me. David still sleeps in the roundabout. Justin still walks several miles to his bed. Xavier will still sit at the corner of Buganda Road and the church parking lot. And I will return to my bed, my car, my job. I will return to a better life, as I understand ‘better’ to be. And I will leave David, Justin and Xavier behind.

Compassion is a fickle thing. Does God give a heart of compassion to change others, or to change the compassionate? Or, is it both? Will David remember the white guy who gave no money, gave no food, took no pictures and asked questions? Will Justin? Xavier? Or, will the stories I’ve heard, the poverty I’ve seen, the lives I’ve collided with in Uganda forever remain solely with me? 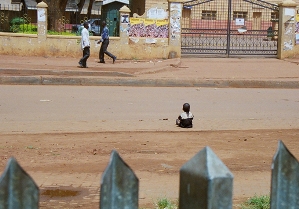 I still don’t have the answers. Which in a way, is cool. Because I couldn’t give any answers to the youth who was asking the questions. It’s something she’ll have to figure out as she discovers her own heart of compassion. All I could tell her is that all she could do, and all she is called to do, is walk alongside her friend.

And it was in that reply that something profound struck a chord in my thoughts: That’s really all Christ did. He didn’t leave this world in perfect order. He didn’t heal everybody. He had to leave behind the broken, the hurting, the lame, the deaf.

And he told us to walk with them in his place.

I met David earlier on the streets of Kampala. He is a fourteen year-old boy, who told me he sleeps at night inside a roundabout in the middle of the street.

Justin is one of the invisible children of Northern Uganda. I met him in Kitgum, Uganda just a few days earlier. I asked him, “What would make you happy?” He replied, “For there to be peace.”

Matt Kok is from Ontario, Canada and used to work in youth ministry near Vancouver.