My heart has once again been ripped out of my chest. In the midst of seeing other people’s pain I find myself looking more and more selfish. We pulled up to the orphanage today in our little red tuk-tuk like we always do every morning at nine. Before we could even get out the kids had jumped into our laps squealing “Mommie!” in delight and practicing their favorite English phrase, “How are you? I am fine, thanks. And you?” 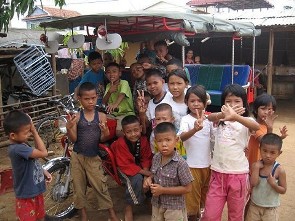 I usually love this exchange of love right away with these precious kids, but this morning I was more annoyed than anything.

I didn’t want to be the jungle gym today. I didn’t want kids grabbing the back of my arms and pinching my “muscles.”

They’re so amused with any bit of fat on a person, as all of us can attest to, they love pinching the back of your arms. We on the other had don’t love it so much. Usually you just sort of laugh a little and pull away or give them a hug so they stop doing it.

I finally managed to get out of the tuk-tuk which only made the chaos build. Mind you this is no different than any other day at CPCDO, but today I just couldn’t do it. I felt empty in the loving kids department, like I had been used up and couldn’t even fake my way through another hug. I had to get out. So I headed towards the baby room.

I thought at least there I won’t get poked and prodded at, I’ll just get cooed at by beautiful little faces. The worst that could happen is that I’ll get peed on. I sat down and picked up Peter, one of my favorite babies. I was craving a place to just be alone with this kid, so that I could escape everyone else and not have to give everyone something: hug me, touch me, give me a smile, play that hand slapping game with me, hold this baby, come over here, draw this picture, let me squeeze your gut and let’s laugh about how fat Americans are. I just didn’t want to deal with it. So the babies were my refuge.