Singer/songwriter and Compassion blogger Shaun Groves posted a tongue-in-cheek blog last week about his recent trip to Kolkata, India, criticizing churches in the developing world for “doing it all wrong.” He cites churches that he’s visited in India, Africa, and Latin America that have made worship centers not just places where the religious parade their spirituality on Sundays. 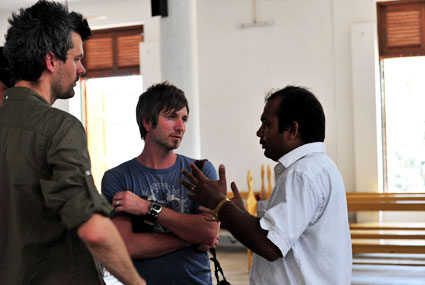 In a compelling photo blog, Groves sarcastically lambastes the pastors who are doing “unchurchy” things like community development, education, and skills training.

In churches where the poorest of the poor gather, he found the sacred/secular dichotomy that is so prevalent in the West breaking down before his eyes.

Apparently, no one told them that in order to be good Christians, they had to separate religion from everything else in life.

As pointed as the blog is, Groves makes some worthwhile points about American spirituality and hints at the fact that maybe the poor get something that we do not – namely, how to be holistic Christians.

This is one reason why we need to go on mission trips and experience other cultures and discover new paradigms for redemption. Those of us who have been entrenched in the fast faith of America for so long need to find such foolish churches, as Groves found, that are sharing the love of Christ not in a way that not only transforms individuals, but changes entire cultures.

I want to believe that my Jesus is big enough to do that. Don’t you?