We had a conversation with Bill Shaw, a missionary in the Philippines, a few weeks ago about a street newspaper he wants to start to provide jobs for the homeless. We still plan on featuring that interview, but in the mean time, we wanted to share this piece that Bill wrote. 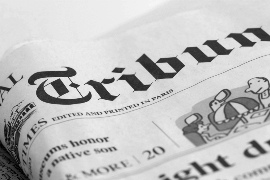 There are three stories swirling around in my mind. I have been tossing in bed, lying in positions I normally would not lay because of these stories. My grandson sleeps with his butt in the air, scrunched up like one of those worms that pinch together to crawl, but he stays pinched. These stories pinched me in that position, so I am up and writing at four am. This is the time I normally sleep the soundest.

The stories have this vague and disturbing connection that I do not want to identify. I have an idea that identification would be too painful.

The first story is about the reports that have come out of Mayo clinic in the last year and are continuing to come out now. They are incredible stories of medical care, life, death, the naked trauma of those suffering, and those suffering with the suffering. It is a story that will most likely be a book and a movie someday. I wont write it, but someone will, and many will read it. It is a testimony of love, desire for life, the victories of society and the losses in spite of those victories.

The second story is clouded in ignorance. It is a celebration I have never been to, but hear about and observe from my car, because of the traffic jam it causes. It is All Saints Day. The day that death is remembered and celebrated in the Philippines. It is a day of feasting, and all that goes with feasting. I think it must be like our Thanksgiving, but instead of turkey they have fish balls and foods such as that. And instead of home they meet at the graveyards and picnic there: the dead and the living together. They start early and stay late. There is drinking and gambling and laughter and song and prayer.

The third story is of a girl, who is eight. She is the wind that makes these stories swirl so violently and sleeplessly. She is dead, and All Saints day has passed. She died on All Saints day during the celebration, pushed out of the hospital on a gurney, the doctor pumping a hand respirator steadily and consistently, her little chest moving, until the car of the missionary was brought around and the respirator was disconnected and the child expired, on the dirty sidewalk, on a mobile bed.

What are you doing? The missionary had asked. Are you insane?

She asked that because in England the death of a child is covered with a thousand thin layers of compassion and care, that still make a book, which is heavy and weighty, but it is careful for the living and careful of the dying, and this wasnt either.

The girl had been taken to the hospital in the morning of All Saints Day, the beginning of the celebration. She had been diagnosed with leukemia earlier in the week, which one percent of the children have. The hospital gave her a blood transfusion in the morning, of All Saints Day. She went comatose. The family began to pump a hand respirator to keep her alive. They called the missionary, who came down. The missionary wondered about the coma and ordered a cat scan. She wondered about the blood type given. She paid for an automatic respirator. She went home and awaited the results.

She was called again. There was a blood clot in the brain. The girl was dead. They were taking the body home in a jeepney. Could she come?

The missionary was surprised at the hospital. The hand respirator was re-connected. The girl was still officially alive and breathing with assistance. The doctor had the cart with the girl, and the respirator that she pumped. She wheeled the child down the corridor, out the front doors to the hot and humid sidewalk.

Where is your car? The doctor said.

What, here, now? The missionary asked.

The missionary got the car and stood there dumbfounded as the respirator was disconnected, and the heaving chest went quiet on the sidewalk. That is when she had asked. Are you insane…?

But Ma’am, the doctor said This is what they wanted. This is all the family could afford.

They put the dead girl in the car, took her to their home, and laid their child on her bed, of cardboard. The father leaned down and rested his ear to her chest, just to make sure, just to understand.

I had this dream that I was bustled out of that same hospital, a guard on each arm pushing me along, but I didnt need pushing because I didnt know I had the right to stay, to dignity, to life. I hustled right along with them.

This is not a story I made up in Manila. This happened yesterday. This is how the poor die. This is the care they receive.

Note: If the girl had died in the hospital, it would have cost the family a minimum of sixty more dollars. They felt they had imposed on the missionary, and despite their loss were acutely cognizant of their imposition. They are grateful, for all that had been given them.
If you liked this article, check out: Lucky $2 Bill

Bill, Debbi and Mary Shaw are serving with Kids International Ministries in Manila. They are starting a street magazine, as a voice for the homeless and poor. In addition, the vendors of their magazine will receive fifty percent of the magazines sale price, giving them a job with dignity and provision.

To support this publication, pre-market subscriptions are being accepted at five, ten or more dollars a month. Please contact [email protected] for subscription opportunities.